Artworks members Ruth McCabe and Alfie Carpenter have paired up to exhibit their evocative landscape paintings at Addenbrookes Hospital, Cambridge. 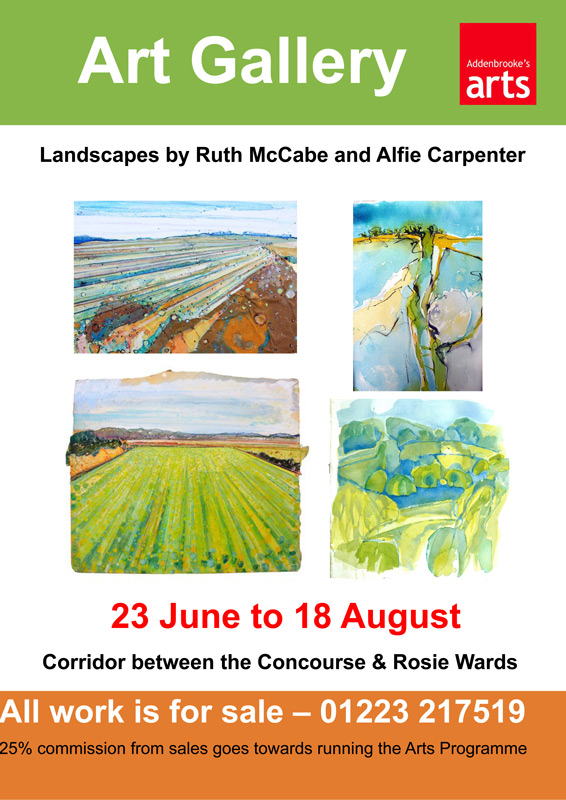 The exhibition follows on from Alfie’s display entitled Circulation at St James’ Hospital, Leeds, where over £4000 was raised for cancer charities. Fundraising continues with the opportunity to sponsor a large painting donated to the hospital and enter a raffle where you can win an original mini artwork which Alfie will paint for you. To be in with a chance, please make a contribution here – http://uk.virginmoneygiving.com/AlfieCarpenterPainting

Of his work at Addenbrookes, Alfie says he “wanted to capture the expansive patchwork of the flat fenlands around Cambridgeshire. I love the inescapable horizon which forces you to gaze into the far out distance; asking you to look forward and ponder that which lays ahead. For me, I thought of the NHS, the state of our planet and our society’s wellbeing in these uncertain times.”

In recent years, evidence has emerged which shows that displaying artwork in hospital spaces is successfully encouraging patient and staff wellbeing. A study at Chelsea and Westminster Hospital found that 75% of patients found the presence of art in the hospital reduced stress levels. Remarkably, evidence also suggested that patients exposed to visual art and live music during the post-operative period required less analgesia per day than patients recovering in the absence of visual art and live music. These patients also stayed one day less in hospital. 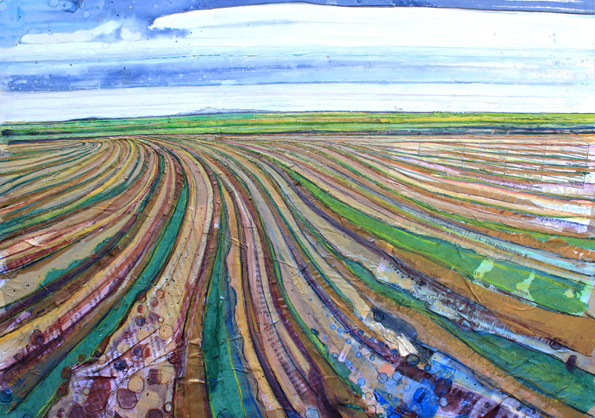 As an artist with a background in botany and zoology, Ruth McCabe has exhibited with the Royal Watercolour Society at Bankside Gallery, London, and in the Sunday Times Contemporary Watercolour Competition at the Mall Galleries, London.

“I love the natural world in all its shapes, forms and climates, whether it is classically beautiful, or scarred by industry. The nature of living organisms fills me with awe. As an undergraduate I studied Botany and Zoology, which taught me to look very carefully. It also deepened my appreciation of the immense complexity of form and function in living things. I enjoy the translucency of watercolour and its flow over the surface, and the rich texture and depth of colour of oils.”

The collection presented for Addenbrookes offers Ruth’s responses to two contrasting landscapes: the quiet undramatic agricultural landscape of east and coastal Suffolk and, from her 2015 residency in Snowdonia, the massive powerful forms of that mountainous region and its slate quarries.

Ruth is also one of the organisers of Inspired by Becker, an exhibition that will take place at St Peter’s Church in Wenhaston, Suffolk  from 5th to 7th August 2016, and will tell the story behind this initiative, now in its fourth year of presenting contemporary artwork by artists inspired by the work of Harry Becker who lived in Wenhaston early last century.