Artworks member Janet French has been invited to show her work in a solo exhibition at Clare Hall, Cambridge. The exhibition will include 30-35 of Janet’s unique contemporary landscape images screenprinted onto handmade paper she creates using natural leaves and fibres.

The idea of making paper from leaves began when I started to question the relevance of the materials I was using to the landscape I was working in. Maybe locally sourced materials would reflect in my work something about that particular landscape that, say, a sheet of manufactured white paper or canvas could not. I began experimenting with natural pigments and inks and have slowly developed and adapted traditional paper making methods to create papers from the materials around me

The processes involved reflect my personal relationship with the environment which is not about standing back and admiring the view. It is about connecting with the landscape and understanding through process. It is about cultivating and harvesting and recycling and working with nature. The papermaking process similarly involves working outside harvesting and preparing, working in tune with the seasons and weather.

Each sheet of leaf paper I make is created with an image in mind which incorporates the characteristics of the leaves as an integral part of that image. The challenge has been to strike the right balance between leaf paper and image and not allow the image to dominate. The translucent nature of the paper allows me to print part of the image on the reverse side of the leaves. The image can then be seen in a more subtle way and the natural details of the leaves are enhanced by the underlying ink. I also embrace the natural characteristics of the different leaves by allowing the texture to break through the image. In this way I aim to create a balance between image and paper, man and environment.

An exhibition of Contemporary Silkscreen Prints on Handmade Leaf Paper.

Artworks members Ruth McCabe and Alfie Carpenter have paired up to exhibit their evocative landscape paintings at Addenbrookes Hospital, Cambridge.

The exhibition follows on from Alfie’s display entitled Circulation at St James’ Hospital, Leeds, where over £4000 was raised for cancer charities. Fundraising continues with the opportunity to sponsor a large painting donated to the hospital and enter a raffle where you can win an original mini artwork which Alfie will paint for you. To be in with a chance, please make a contribution here – http://uk.virginmoneygiving.com/AlfieCarpenterPainting 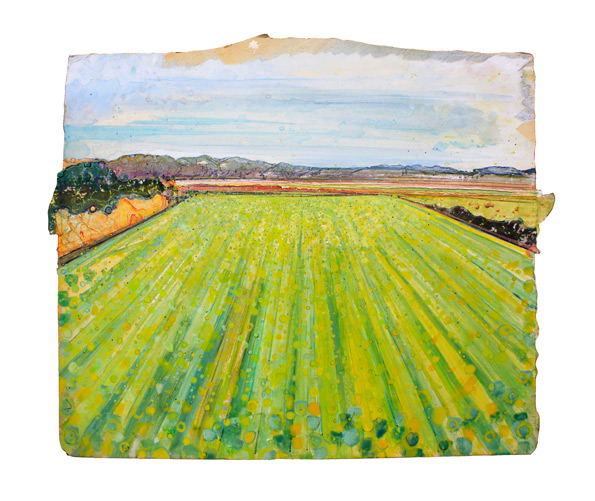 Of his work at Addenbrookes, Alfie says he “wanted to capture the expansive patchwork of the flat fenlands around Cambridgeshire. I love the inescapable horizon which forces you to gaze into the far out distance; asking you to look forward and ponder that which lays ahead. For me, I thought of the NHS, the state of our planet and our society’s wellbeing in these uncertain times.”

In recent years, evidence has emerged which shows that displaying artwork in hospital spaces is successfully encouraging patient and staff wellbeing. A study at Chelsea and Westminster Hospital found that 75% of patients found the presence of art in the hospital reduced stress levels. Remarkably, evidence also suggested that patients exposed to visual art and live music during the post-operative period required less analgesia per day than patients recovering in the absence of visual art and live music. These patients also stayed one day less in hospital.

As an artist with a background in botany and zoology, Ruth McCabe has exhibited with the Royal Watercolour Society at Bankside Gallery, London, and in the Sunday Times Contemporary Watercolour Competition at the Mall Galleries, London.

“I love the natural world in all its shapes, forms and climates, whether it is classically beautiful, or scarred by industry. The nature of living organisms fills me with awe. As an undergraduate I studied Botany and Zoology, which taught me to look very carefully. It also deepened my appreciation of the immense complexity of form and function in living things. I enjoy the translucency of watercolour and its flow over the surface, and the rich texture and depth of colour of oils.”

The collection presented for Addenbrookes offers Ruth’s responses to two contrasting landscapes: the quiet undramatic agricultural landscape of east and coastal Suffolk and, from her 2015 residency in Snowdonia, the massive powerful forms of that mountainous region and its slate quarries.

Ruth is also one of the organisers of Inspired by Becker, an exhibition that will take place at St Peter’s Church in Wenhaston, Suffolk  from 5th to 7th August 2016, and will tell the story behind this initiative, now in its fourth year of presenting contemporary artwork by artists inspired by the work of Harry Becker who lived in Wenhaston early last century.

Artworks are looking for new artists to join whose work is creative and innovative, enhancing the appeal & range of work in our annual exhibition, and artists who will also contribute ideas and enthusiasm to support to the aims & objectives of the Artworks group.

Artworks was established in 2000 and membership is strictly limited to thirty artists. Some of our artists take a sabbatical, providing the opportunity for new artists to join us for one year.

Artworks currently have vacancies for four full (permanent) and three temporary (one-year) artists.  If you are interested in joining Artworks, head on over to the Artworks website for more information on how to apply. The closing date for completed artist applications is 16 February 2013.

See some photographs of the Artworks exhibition: 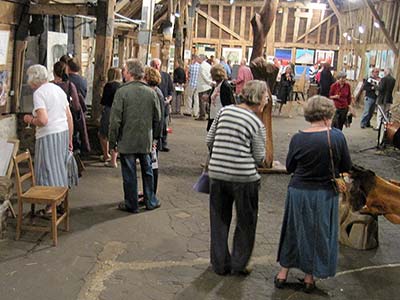 Today we warmly welcome a new artist to Artworks (and the Artworks blog) the highly accomplished and experienced portrait painter, John Glover.

John Glover recently won the Rowland Hilder Award at The Royal Institute of Painters in Watercolours Annual Exhibition at the Mall Galleries in London. Below is the prize-winning painting, which is entitled ‘Mrs. McLeod’.

John Glover’s subjects include people from all walks of life, from official portraits to more intimate family groups or individual studies. He works in a variety of mediums including pencil, watercolour, pastel and oils.

John says of his work: “As a portrait painter I find myself in a very privileged position. I am invited into people’s lives however briefly, to witness their work, their aspirations, their successes and sometimes their failures, indeed their humanity.“

John is also an experienced teacher in portraiture, life-drawing and painting. He runs day classes locally in the Cambridge area and also teaches at summer schools throughout the UK. John also offers painting demonstrations to many art groups and societies. He is also available for individual, one-to-one art tuition.

Visit John Glover’s website for more information on commissioning a portrait or attending one of his art tuition classes.